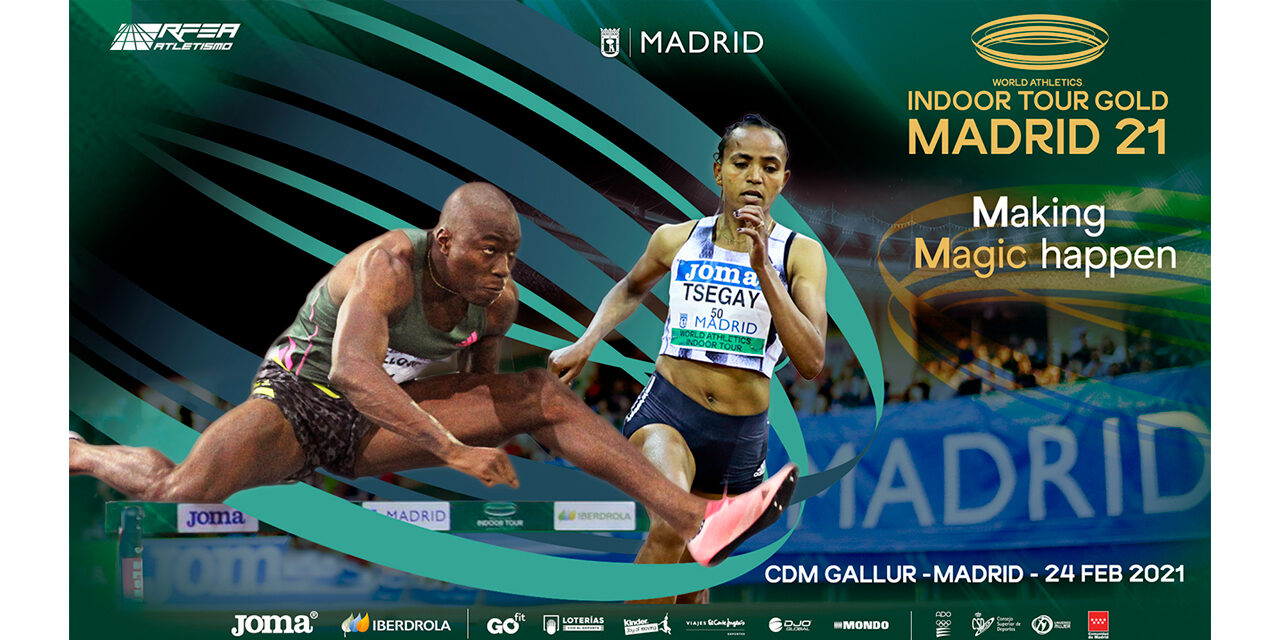 Grant Holloway and Gudaf Tsegay will aim to surpass the world indoor 60m hurdles and 3000m records at the Villa de Madrid meeting on Friday 21 February, the final stop on the World Athletics Indoor Tour Gold. It will be the last world class indoor competition before the European Championship – hold in Torun on 5-7 March.

Just a year ago, two-time triple jump global champion Yulimar Rojas extended the streak of the Spanish capital with world records by setting the 31st one in this soil with a 15.43m leap. “I feel a special bond with Madrid. I want this city to be the epicenter of my sports career,” said the Venezuelan athlete last Saturday, when she was awarded with a commemorative plaque at Gallur Municipal Sports Center, the facility where she broke the world record.

Eight of the ten World Athletics Indoor Tour Gold champions will be crowned at Madrid21 – six of which are yet to be decided, except women’s 800m and men’s long jump, already locked by Ethiopia’s Habitam Alemu and Cuba’s Juan Miguel Echevarría.

Ivory Coast’s Arthur Cisse leads the field with a personal best of 6.53 set in Berlin two weeks ago which ranks him #4 in the season list, just 0.05 shy of the top. Dutch-record-holder Joris van Gool (6.58) will be Cisse’s main contender for the win, whilst 60/200m national champion Daniel Rodríguez (6.67), national-record-holder Yunier Pérez (6.52), José González, Sergio López Barranco, Mario López Moure and Ricardo Sánchez will be the Spanish representants.

Ethiopia’s Habitam Alemu heads of Madrid off the back of a personal best win in Torun (1:58.19), which secured her the World Indoor Tour Gold title after her second place in Liévin two weeks ago. Ireland’s national-record-holder Nadia Power (2:00.98) and in-shape Spain’s 1500m champion Esther Guerrero will be Alemu’s biggest rivals. Natalia Romero and Lorena Martín (pacer) complete the local presence.

Two-time world bronze medalist in the steeplechase Gesa-Felicitas Krause will step down to the metric mile to take on Spanish silver medalist Marta Pérez. Her fellow compatriot and three-time indoor national champion Solange Pereira is also entered in the race as Italian Federica del Buono is.

Ethiopia’s Selemon Barega lead a stacked line-up which also includes current silver and bronze European indoor medalists Poland’s Marcin Lewandowski and Spain’s Jesús Gómez. World silver 3000m medalist Barega heads to Madrid off the back of personal bests in Metz, Liévin and Torun, where he ran his fastest-ever 3000m in 7:26.10 and 1500m in 3:32.97. Sergio Paniagua will be the second Spanish racer.

Recent 1500m indoor world record holder Gudaf Tsegay (3:53.09) targets a new world best of 8:16.60 – now in Genzebe Dibaba’s hands. But first she will have to beat fellow Ethiopian Lemlem Hailu, who has been undefeated this indoor season so far after winning in Liévin and Torun. In Poland 19-year-old Hailu set an impressive world lead time of 8:31.24 ahead of 3000m steeplechase world record holder Beatrice Chepkoech.

Colin Jackson’s world record of 7.30, set in 1994, is under threat of world 110m hurdles champion Grant Holloway. The North American record holder possesses three of the six fastest ever times, including 7.32 in Liévin two weeks ago which ranks him second in the all-time list. Only a dozen men have dipped under 7.40 in the event and Holloway has done so on seven occasions, five of those over the last four weeks.

Current world indoor champion Juan Miguel Echevarria, who has jumped 8.25m this winter, secured his second World Indoor Tour Gold title with victories in Karlsruhe and Liévin. The Cuban athlete already knows the winning feeling in Madrid, as he did it last year with an 8.41m leap. Echevarria will be pushed by the likes of European silver medalist Thobias Montler and two-time world outdoor finalist Spain’s Eusebio Cáceres. His country fellowmen Francisco Javier Cobián, Jean Marie Okutu and Daniel Solís, who finished 2nd, 3rd and 4th behind Cáceres at Nationals yesterday, are also entered in the contest.

European indoor champion Ana Peleteiro is getting back in shape before trying to retain her continental crown in Torun. Last Saturday she leaped a season best of 14.21m on her route to win the Spanish Championship in Madrid. At Gallur Municipal Sports Center she will take on North American record holder Tori Franklin and two of the most-in-shape triple jumpers so far this season: Cuba’s Liadagmis Povea (14.54m) and Belarus’ Viyaleta Skvartsova (14.39m). 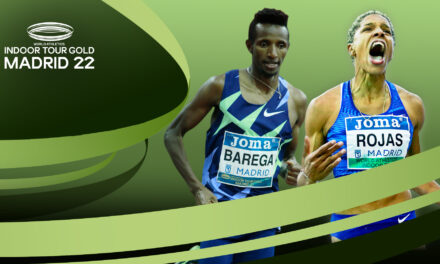